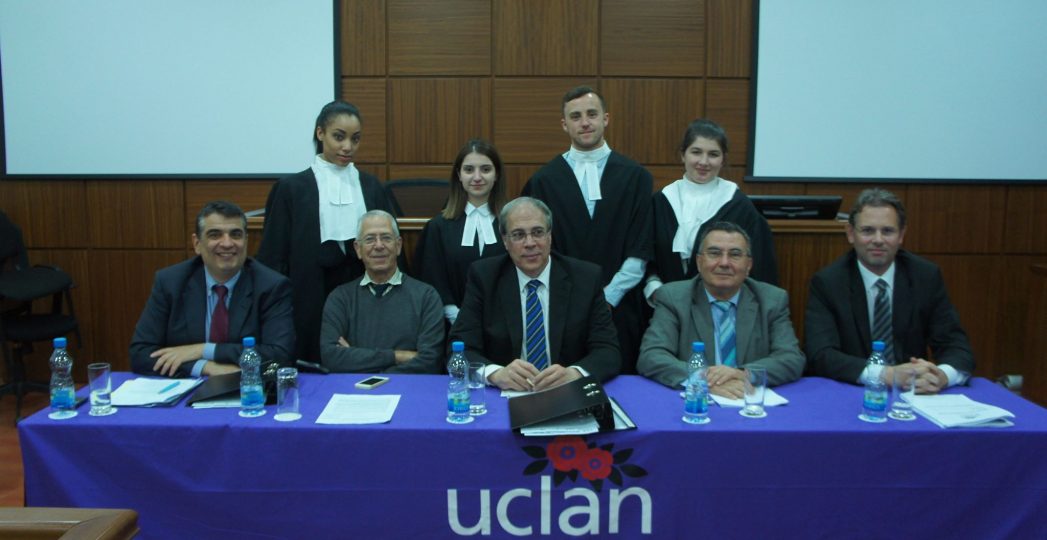 On 27th February 2017, the final round of the 4th Annual Mooting Competition took place in the Moot Court Room of UCLan, Cyprus.

Saten and Sean won the Final based on their excellent mooting skills and overall performance.  That said, all four students performed admirably and they are to be commended. Danai and Alexandra actually won the appeal before the Court.

The final was judged by a panel of five judges.  The chairman of the panel was Judge Haris Boyiadjis, President of the Nicosia District Court.  Judge Boyiadjis was accompanied by Judge Akis Hadjihambis (Retired), a former president of the Supreme Court of the Republic of Cyprus, Judge George Arestis (Retired), a former judge of the Supreme Court and of the Court of Justice of the European Union, Mr Michael Kyriakides, a partner of Harris Kyriakides LLP, a law firm based in a Larnaca, and Dr Klearchos A. Kyriakides, Assistant Professor in the School of Law at UCLan Cyprus.

This event was supported by the Mooting Society, whose committee was was at the heart of the organisation of the Mooting Competition from the first round onwards.

After the moot, Judge Boyiadjis offered some constructive feedback to the four finalists.  He also drew upon his own experience as a practising lawyer and, latterly, as a judge to venture some wise thoughts on the importance of professionalism in a courtroom setting.

The University is grateful to Judge Boyiadjis, Judge Hadjihambis, Judge Arestis and Mr Kyriakides for visiting UCLan, Cyprus and for supporting the Mooting Competition.

Mooting enables law students to apply the theoretical knowledge gained from lectures in a realistic courtroom setting and to apply such knowledge to a practical scenario.  At UCLan Cyprus, the Mooting Competition fulfils these functions while at the same time helping all law students to deepen their knowledge of the law, to strengthen their research skills, to polish their public speaking skills and, if they wish to enter the legal profession, to enhance their preparations for life in the field of advocacy.