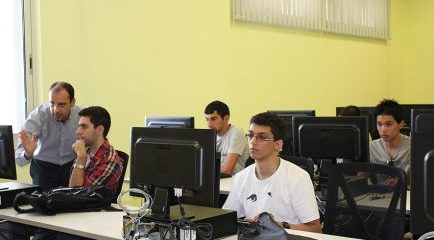 The first research seminar of the School of Computing & Mathematics at UCLan Cyprus, was held last Thursday, December 13th, on the campus premises, and was entitled: “Future Trends in Computing”. The seminar featured talks by two prestigious academics of the University of Cyprus and the Cyprus University of Technology respectively, where they discussed research advances in their own scientific specialization areas and further presented their own views as to where technology is heading in those areas and how such advances may affect social interactions and personal psychology of the users of those technologies.

Dr. Andreas Siamarou, Research & Quality Assurance Lead of UCLan Cyprus, welcomed on campus, Dr. Andreas Pitsillides, professor at the department of Computer Science of the University of Cyprus, and head of the Networks Research Laboratory (NetRL), as well as Dr. Despina Michael, lecturer at the department of Multimedia and Graphic Arts of the Cyprus University of Technology, and scientific coordinator of the Microsoft Computer Games and Entertainment Technologies (GET) Research Lab.

Dr. Pitsillides discussed the interplay of real and digital worlds, through the intelligent use of resources and sensor technology, towards the establishment of an Internet of Things and a Web of Things. The unfamiliarity of the terms did not stop the audience from realizing what the terms represented since a discussion on futuristic applications, e.g. a refrigerator that can inform its user when she needs to buy more milk, soon emerged and captured the audience’s attention. The NetRL has made quite some headway in the particular research area, with the project “Social Electricity” (led by Ph.D. candidate, Andreas Kamilaris) being awarded First Prize at international ITU (International Telecommunications Union) competition, in September 2012. The project was developed in cooperation with the Electricity Authority of Cyprus, as a Facebook application, aiming to make consumers aware of their energy consumption, so that they can take steps to reduce the electricity they consume, aiming to use technology to improve society’s environmental awareness.

Dr. Michael introduced the serious side of games, i.e. when they can be used for education, training and behavioural studies. Such games have been developed for important national bodies and organizations, e.g. the army and museums. The audience responded positively to the realistic 3D graphics of the presented games and Dr. Michael commented that the realism of virtual worlds may affect the psychology of the game user, resulting in some kind of control of the game over the user, instead of the traditional situation where the user has complete control over the game, especially in virtual worlds where avatars may be used to represent users in the game.

The audience comprised of students, academics as well as non-academic professionals, who engaged in an interesting question & answer session after the presentations, which focused on the opinion of the invited researchers on the effect of technology advances in social interactions and personal psychology. The researchers agreed that technology can simplify life and provide safer and more economic solutions; however, it cannot be prevented from being maliciously used as well. The issue is an object of current research internationally both in psychology and sociology.