Apply Now
Home / Discover / Happenings / Seminars & Events / Legally regulated administration of dowry. (Or: how to manage or not to manage your wealthy wife’s money)
Go back to Homepage 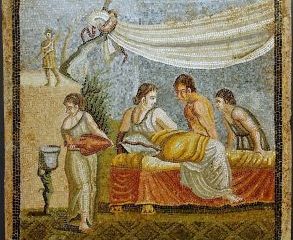 Legally regulated administration of dowry. (Or: how to manage or not to manage your wealthy wife’s money)

“Legally regulated administration of dowry. (Or: how to manage or not to manage your wealthy wife’s money)”

The search for wives with handsome dowries by ambitious young men was a familiar scenario for Roman satirists—poets of the early imperial period (1st c AD)—, which reflects a noticeable social pattern. This would seem odd since the husband did not have a right to his wife’s dowry. As a matter of fact, each spouse in a Roman marriage retained control of whatever property each had prior to the marriage, and any subsequent increase belonged to the party owing the property increased. Still, husbands could invest their wives’ dowry and reap the profit (fructus). The administration of dowry for reasons of investing could be associated with problems. The most important set of difficulties that could arise for the wife would concern the recovering of the dowry at the end of the marriage. To determine the husband’s administration of his wife’s dowry during the marriage (and so to be able to separate the dowry from property both spouses had collectively acquired) the Romans had devised forms of regulation that prescribed clearly how husbands were expected to handle dowry property.

Sophia Papaioannou (BA Summa cum laude Greek Philology, University of Crete; MA, PhD Classics, University of Texas at Austin) is Associate Professor of Latin Literature at the National and Kapodistrian University of Athens. Her academic interests include the literature and society of the Age of Augustus and the first century of the Roman Empire; roman drama (especially comedy); the reception of Greek literature at Rome; and the contribution of orality and the traditions of oral literature to the formation of literacy in the late third / early second century BCE. She has authored, edited and co-edited seven books and over forty articles or chapters in refereed volumes, and she has delivered over eighty papers at international conferences or at colloquia upon invitation.