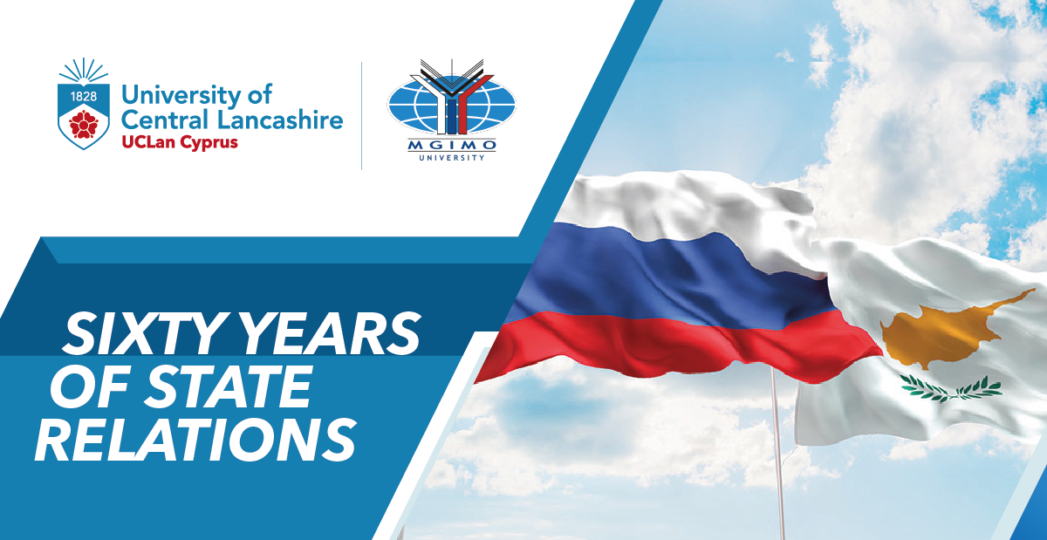 The School of Law of UCLan Cyprus and MGIMO University were delighted to hold a joint Online Symposium entitled ‘Sixty Years of State Relations’ on 2 December 2020 at 17:30 (Cyprus time), celebrating the passage of 60 years since the Republic of Cyprus established diplomatic relations with the then Union of Soviet Socialist Republics (USSR) on 18 August 1960. The Symposium was supported by the Embassy of the Russian Federation in the Republic of Cyprus. It also marked the conclusion of a Memorandum of Understanding between the Cyprus Campus of the University of Central Lancashire (UCLan Cyprus) and Moscow State Institute of International Relations (MGIMO University) in Moscow.

Due to the ongoing COVID-19 pandemic, the Symposium had to be conducted fully in an electronic setting with speakers sat in Cyprus, Russia and Denmark respectively. Even so, it managed to fulfil its stated aims which were to reflect on 60 years of the relations of the Republic of Cyprus with the Russian Federation through diplomatic and trade relations in the wider geopolitical region.

The Symposium continued with a Keynote speech by Dr Erato Kozakou-Marcoullis, Former Minister of Foreign Affairs, Republic of Cyprus and Honorary Fellow, School of Law, UCLan Cyprus, providing a thorough historical and empirical review of the strong diplomatic links between the two countries over the past 60 years and concluding that: “the Government of Cyprus should work very closely with the Government of the Russian Federation to maintain and further strengthen our relations, having always in mind that this friendship has endured for over 60 years and has flourished, not because of pragmatic interests but, moreover, because of deep-rooted values and principles upon which both countries have based their relations”. Her keynote speech may be found here.

The second and final presentation was entitled ‘The WTO Dispute Settlement System as a New Actor in the EU-Russia Trade Relationship’ by Dr Henrik Andersen, Associate Professor, Copenhagen Business School, Denmark and Senior Visiting Fellow, School of Law, UCLan Cyprus. The paper supporting the presentation addresses the WTO DSB and its role in settling disputes and strengthening legal certainty relevant for businesses in the Russia-EU trade relationship. The full paper can be found here while the presentation slides can be found here.

The Symposium ended with a ‘Closing Address’ entitled ‘Some thoughts on the Cyprus-Russia relations in an EU context’ by Professor Stéphanie Laulhé Shaelou, Professor of European Law and Reform and Head, School of Law, UCLan Cyprus. She reminded all that whereas the Cyprus-Russia bilateral relations are at their high in full mutual respect and trust, the EU-Russia relations remain frosty and are marked on occasions by a war of sanctions and integration fatigue. It is in the interest of all nations or group of nations to maintain good neighbourly relations, and Cyprus could facilitate this in the EU-Russia relations, whereas at the same time, Russia guarantees Cyprus’ right to sovereignty and facilitates its neighbouring relations. The renewed context of the pandemic is yet once more the opportunity for enhanced and coordinated neighbouring relations.

The video of the full Symposium is publicly available at the following link: https://youtu.be/RONm30ERRTc