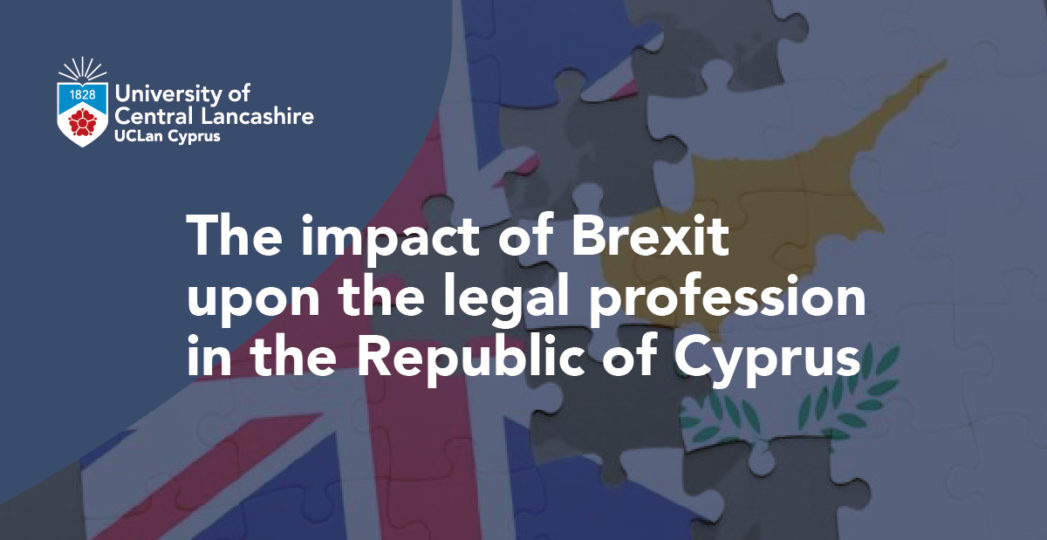 At 23:00 GMT on 31 December 2020, eleven months after the exit of the United Kingdom from the European Union, the post-Brexit transition period came to an end and a new phase in the Brexit process came into existence.

In the light of this pivotal development, the School of Law of the University of Central Lancashire Cyprus held the first of a series of free Brexit-related Continuing Professional Development (CPD) webinars on the impact of Brexit upon the Republic of Cyprus. In this first webinar, which unfolded from 17:00 until 19:00 Cyprus time on Wednesday 20 January 2021, the spotlight was shone on to the impact of Brexit upon the legal profession in the Republic of Cyprus.

The ongoing COVID-19 pandemic precluded any part of the webinar from being held on campus.  However, via the Microsoft Teams platform operated by the University of Central Lancashire Cyprus, it was livestreamed to the members of the audience who had pre-registered to attend.

The webinar was sub-divided into four parts.

The first part was delivered by Professor Stéphanie Laulhé Shaelou, Professor of European Law & Reform and Head of the School of Law at the University of Central Lancashire Cyprus (UCLan Cyprus). She offered some introductory remarks on the provisions in the EU-UK Trade and Cooperation Agreement 2020 of relevance to the provision of legal services and legal education. She then welcomed the two speakers, as well as the members of the legal profession, law students and other attendees who were attending online. You may listen to her views as embedded in the podcast referred to below and available here: https://saskiaconstantinou.com/podcast/stephanie-shaelou/

The second part was delivered by Dr. Klearchos A. Kyriakides, Assistant Professor and Deputy Head of the School of Law of UCLan Cyprus.  He outlined the legal history of Brexit, pinpointed some of the salient legal texts that have emerged from the Brexit process and explained some of the historico-legal reasons why Brexit has already had – and will have – profound implications for the Republic of Cyprus, its judiciary, its legal profession and its community of law students.  Klearchos paid particular attention to relevant provisions of the EU-UK Withdrawal Agreement and the EU-UK Trade and Cooperation Agreement.  A copy of his powerpoint presentation is available HERE

The third part was delivered by Marco Cillario, International Policy Adviser (Europe) at The Law Society of England and Wales in London, the representative body of solicitors in England and Wales.  He considered the change caused by Brexit to the practice rights in England and Wales of practising lawyers who are members of the Cyprus Bar Association or European Lawyers who are registered in the Republic of Cyprus.  With the law students in the audience very much in mind, Marco also drew attention to the ongoing reform of legal education in England and Wales, which has coincided with the Brexit process.  A copy of his handout is available HERE

The fourth part of the webinar was a Question-and-Answer session to which members of the audience and all three speakers contributed.  This session gave practising lawyers and other attendees an opportunity to ask questions and to reflect upon their own experiences of Brexit as it has affected them.

A video recording of the webinar is available here.

On the day after the webinar, Professor Stéphanie Laulhé Shaelou discussed the main themes of the webinar on the English language programme presented by Saskia Constantinou on PIK Classic, one of the radio stations of the Cyprus Broadcasting Corporation (CyBC).  Over the course of 45 minutes or so, Stéphanie answered a series of questions on Brexit generally and how it affects the Republic of Cyprus.  This appearance enabled a wider non-specialised audience to benefit from the webinar.  A recording of this appearance is available here: https://saskiaconstantinou.com/podcast/stephanie-shaelou/

The School of Law of UCLan Cyprus thanks Marco Cillario and his colleagues at The Law Society of England and Wales for their role in support of the webinar.  The School of Law also thanks Saskia Constantinou, CyBC and everybody else who was involved in directly or indirectly supporting the webinar.  Last, but not least, the School of Law thanks the attendees for pre-registering and thereafter attending.

This Webinar was designed for the CPD of professionals in the Republic of Cyprus and internationally. UCLan Cyprus, through its Law School, is an accredited provider of Continuing Professional Development (CPD) programmes under the relevant Cyprus Bar Association scheme.  The Webinar carried 2 CPD non-certified units for the members of the Cyprus Bar Association.