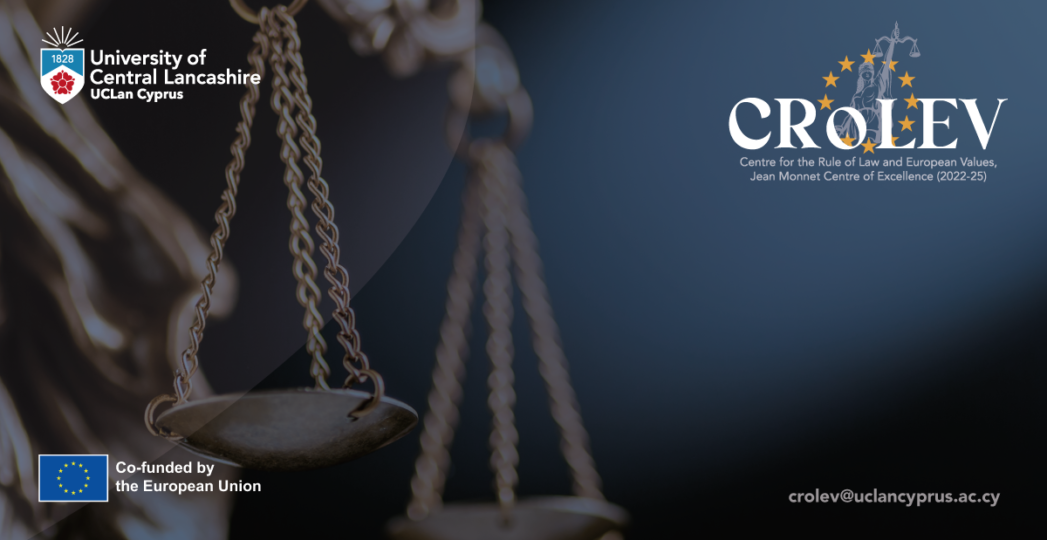 The School of Law of UCLan Cyprus is pleased to announce the launch of the ‘Centre for the Rule of Law and European Values’ (CRoLEV), a new Jean Monnet Centre of Excellence funded by the European Union under the Erasmus+ programme 2021-27, Jean Monnet Actions for the years 2022-2025.

The rule of law, democracy, and fundamental rights, jointly some of the fundamental values upon which the Union is built, are currently under threat, primarily in Central and Eastern Europe but also across the EU and in neighbouring countries. From threats to the independence of the judiciary, to muzzle laws seeking to silence and discipline members of the judiciary critical of governments, and from the erosion of the separation of powers to limiting free speech, core elements of liberal democracies are jeopardised. The current pandemic has brought to the forefront concerns about the state of the rule of law, its compatibility with emergency measures, and the deterioration of European values and principles. CRoLEV intends to (i) explore the state of the rule of law within the EU and in neighbouring countries, using empirical research; (ii) investigate the deterioration of the rule of law and EU values in times of crisis; (iii) evaluate the mechanisms available at the EU level to secure European values and rule of law protections; and (iv) deliver research-informed teaching designed to reach academics, students, and professionals, but also young people and the civil society across Europe. The rule of law crisis goes to the heart of the European project. CRoLEV intends to raise awareness about the fragility of the rule of law and values in times of crisis, thus inspiring action to safeguard the rule of law and European values both at the domestic and at the EU level.

The project aims to enhance teaching excellence in the area ensuring that UCLan Cyprus and other partner institutions’ undergraduate and postgraduate students across disciplines, as well as young professionals and members of civil society, become familiar with the threats to the rule of law existing in Cyprus and beyond. Moreover, CRoLEV will strengthen European studies in the Eastern Mediterranean region, disseminating research on the rule of law and European values in neighbouring countries at partner institutions and beyond. The project will organise a series of activities, such as public lectures and intensive courses by world-leading experts on the rule of law. In addition, CRoLEV will create and maintain an interactive dashboard and index tracking the state of the rule of law and European values in Cyprus and other countries. The project’s outputs will therefore be of value to state and EU authorities, but also to international actors within and beyond the EU.

In studying the state of the rule of law, mechanisms to measure it, and methods to improve its state in Cyprus and elsewhere, the Centre aims to become a hub to raise awareness about the importance of the rule of law and to contribute to the protection of core European values, including individual rights, equality, democracy, and active citizenship. As such, CRoLEV will foster dialogue between the academic world and society, including local and state level policy-makers, civil servants, civil society actors, and representatives of the media.

The Jean Monnet Centre of Excellence is directed by Professor Stéphanie Laulhé Shaelou, Professor of European Law and Reform and Head, School of Law of UCLan Cyprus. All the CROLEV Team would like to invite interested parties to follow its initial establishment and express an interest in staying informed.