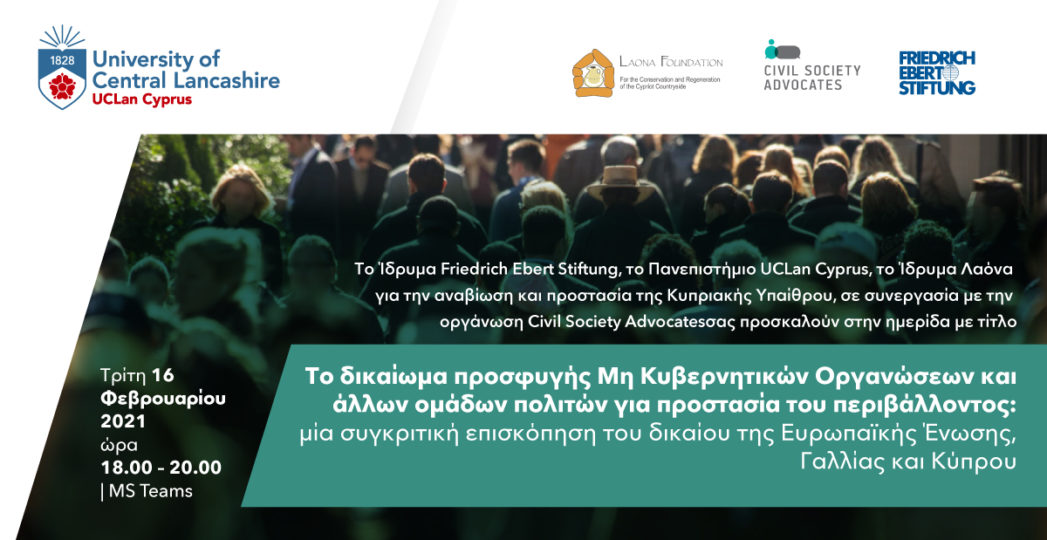 The School of Law of UCLan Cyprus, the Laona Foundation for the Conservation and Regeneration of the Cypriot Countryside, the Civil Society Advocates and Friedrich Ebert Stiftung held a joint Online Symposium entitled “Access to Justice of Environmental NGOs: A Comparative Perspective (EU, France, Cyprus)” delivered in the Greek language on 16 February 2021 at 18:00 (Cyprus time) on MS Teams and attended by around 80 participants including members of the Judiciary, public prosecutors and officers, legal practitioners, CSO representatives, academics, students and members of the wider public.

The Symposium began with a Welcome Address by the Hon Judge George Arestis (Retr’d), former Judge of the Supreme Court of Cyprus, former Judge of the Court of Justice of the European Union and Honorary Fellow of the School of Law of the University of Central Lancashire (UCLan Cyprus). Judge Arestis set the scene of the three detailed presentations to follow. This was followed by pre-recorded Opening Addresses by HE the Attorney-General of the Republic, Mr George Savvides, and HE the Minister of Justice and Public Order of the Republic, Mrs Emily Yioliti, respectively.

The Symposium continued with an Introductory Address by Prof Stéphanie Laulhé Shaelou, Professor of European Law and Reform and Head of the School of Law of UCLan Cyprus, providing an overview of the Symposium and insightful remarks on the papers presented around the themes of green democracy and environmental justice at the EU and national level. Her introductory remarks can be found here.

This was followed by a series of substantial presentations. Firstly, the Hon Judge of the Court of Justice of the European Union, Dr Constantinos Lycourgos, presented his paper entitled “Locus standi of non-governmental organizations in environmental matters under EU Law”. The Symposium continued with Dr Apostolos Vlachogiannis, Legal Counsel to the Presidency of the Hellenic Republic, with the presentation of his paper entitled “Access to justice for environmental organisations in France: an evolving process towards the Charter for the Environment”. This was followed by a presentation by Dr Artemis Yiordamli, Executive Director of Laona Foundation, of her paper entitled “Cyprus in search of environmental justice: environmental justice and implementation of the 1998 Aarhus Convention under Cyprus Law”. All three papers can be accessed here in the English language.

The papers discussed during the Symposium were published on the website of Friedrich Ebert Stiftung in two languages (Greek and English) and relayed by the Rule of Law Monitoring Mechanism platform of the School of Law of UCLan Cyprus available at: https://ruleoflawmonitoringmechanism.eu/materials. The trilogy presents the evolution in legal instruments and case law at the EU and national level in the field of NGO access to environmental justice and their locus standi. By analyzing, comparing and combining the approaches on an EU and national level, focusing on France and Cyprus, the three papers provide deep legal analysis and solutions which could benefit NGOs, the Judiciary and legal practitioners alike. At the same time, the trilogy offers some thoughts and recommendations to assist with effective judicial protection and access to justice by Cypriot NGOs.

For any further information, please contact the Laona Foundation at 25358632, info@laona.org