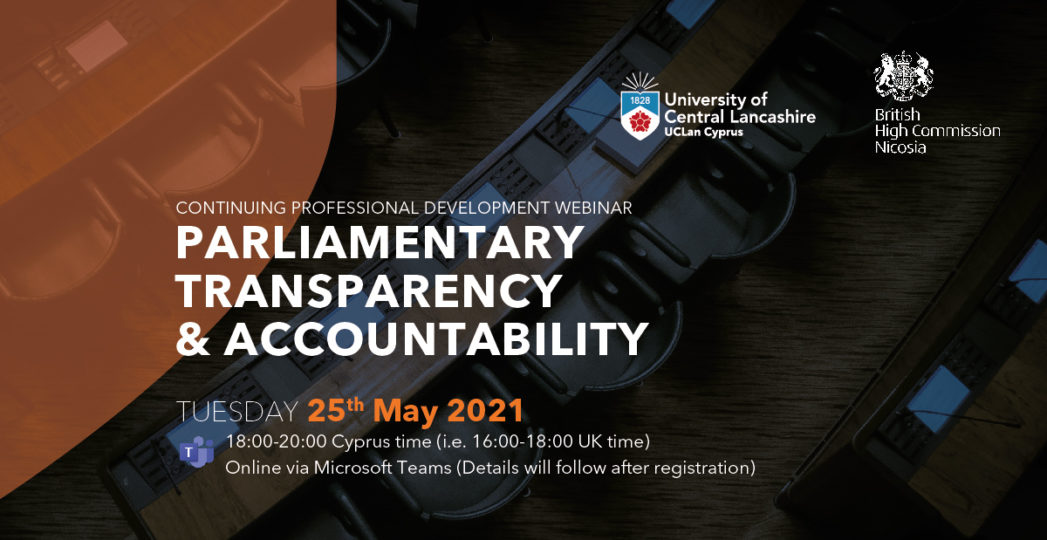 On 25 May 2021, the School of Law of the Cyprus Campus of the University of Central Lancashire (UCLan Cyprus) was honoured to host a Continuing Professional Development (CPD) Webinar entitled ‘Parliamentary Transparency and Accountability’.  This was the second of a series of free transparency-related Webinars organised by the School of Law of UCLan Cyprus, in association with the British High Commission in Nicosia.

The first Webinar, which was held on 31 March 2021, was entitled ‘Open Justice, Transparency and the Judiciary’ and the keynote speaker was Sir Robin Knowles, a Judge of the High Court of Justice of England and Wales. (https://www.uclancyprus.ac.cy/wp-content/uploads/2021/03/CDP_Webinar_Transparency_FINAL.pdf )

The second Webinar of the series began with an Introduction by Professor Stéphanie Laulhé Shaelou, Professor of European Law & Reform and Head of the School of Law of UCLan Cyprus.  She set the scene in the wider framework of the rule of law and its upholding in Europe.

Professor Laulhé Shaelou placed particular emphasis on key indicators of parliamentary transparency, accountability and democratic oversight in the Republic of Cyprus, as reported, firstly, in the newly established European Rule of Law Mechanism of the European Commission.  She noted, in particular, that bills of essence to the rule of law remain pending before the House of Representatives.  At the European level, Professor Laulhé Shaelou referred, secondly, to the latest evaluation round of the Council of Europe’s Group of States against Corruption (GRECO) that assessed the implementation of a series of recommendations pertaining to the legislative branch of power. To these recommendations, she noted, must be added the visceral need for democratic oversight in any modern State, as exercised by its parliament or parliaments.

Mindful of the then run up to the parliamentary elections in the Republic of Cyprus on 30 May 2021 and the ongoing pandemic, Prof. Laulhé Shaelou suggested that transparency and accountability to the wider society have become more fundamental than ever.  If both principles are applied properly, they may prevent illegalities and help to protect the democratic process for which the parliament is co-responsible.

In an effort to highlight the issues at stake in the Republic of Cyprus, Prof. Laulhé Shaelou explained that, prior to the parliamentary elections, she had been consulted as an expert in the Elections Rule of Law series on Cyprus (details of which are at https://democracy-reporting.org/dri_publications/cyprus-elections-and-the-rule-of-law/).

The Introduction of the Head of School was followed by some Opening Remarks by Ben Rawlings, Deputy British High Commissioner to Cyprus, who underlined the importance the UK attaches to promoting transparency across the globe as part of its wider Anti-Corruption Strategy. Mr Rawlings also highlighted the already strong collaboration that exists between the UK and Republic of Cyprus legislative branches, especially in light of our shared values across the Commonwealth, democracy and rule of law.

The next to address the audience was the Keynote Speaker – Saira Salimi, Speaker’s Counsel in the House of Commons of the Parliament of the United Kingdom.  Ms Salimi delivered a compact analysis of the origins, evolution and contemporary character of Parliamentary transparency and accountability, as applied by the Parliament of the United Kingdom.  She paid particular attention to a number of issues.  These included the statutory and common law context vis-à-vis freedom of information, the impact of data protection law and the nature of parliamentary privilege.

Among the Acts of Parliament considered by Ms Salimi was the Parliamentary Standards Act 2009 (available at www.legislation.gov.uk/ukpga/2009/13/introduction).  In the words of its Preamble, this Act not only ‘make[s] provision establishing a body corporate known as the Independent Parliamentary Standards Authority and an officer known as the Commissioner for Parliamentary Investigations’.  It also ‘make[s] provision relating to salaries and allowances for members of the House of Commons and to their financial interests and conduct; and for connected purposes.’

The Keynote Speech was followed by a supporting analysis by Dr Klearchos A. Kyriakides, Assistant Professor in the School of Law of UCLan Cyprus and its Deputy Head.  In his capacity as Discussant at the Webinar, Dr Kyriakides presented a paper in which he identified six lessons which emerge from the politico-legal history of the United Kingdom.  In so doing, he indicated that these are relevant to democracies beyond the shores of the United Kingdom.

The six lessons identified by Dr Kyriakides are listed below:

A full video recording of the Webinar is available here: https://youtu.be/rlpshafmCow

UCLan Cyprus expresses its profound gratitude to Saira Salimi, to Deputy High Commissioner Rawlings and to the colleagues of both.  UCLan Cyprus also thanks the members of the legal profession, law students and members of the general public who attended the CPD Webinar held on 25 May 2021.

The flyer relating to the CPD Webinar is available here: www.uclancyprus.ac.cy/wp-content/uploads/2021/05/Parliamentary_Flyer.pdf

Firstly, on 10 June 2021, Ms Annita Demetriou, one of the Members of the House of Representatives of the Republic of Cyprus for Larnaca, was elected to become the President of the House.  She is the first ever woman to serve in that role.  Ms Demetriou is a former Recruitment and External Liaison Officer of UCLan Cyprus.

Finally, it is hoped that this press release will enable the educational impact of the CPD Webinar held on 25 May 2021 to be long-lasting and not geographically confined to the Republic of Cyprus.  After all, parliamentary transparency and accountability are principles of interest to parliamentarians, lawyers, law students and members of the general public wherever they may be, especially in those parts of the Commonwealth and the wider world that share the common law tradition or the Westminster model of parliamentary democracy. 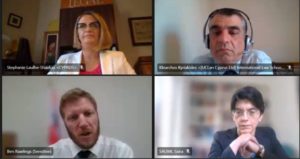