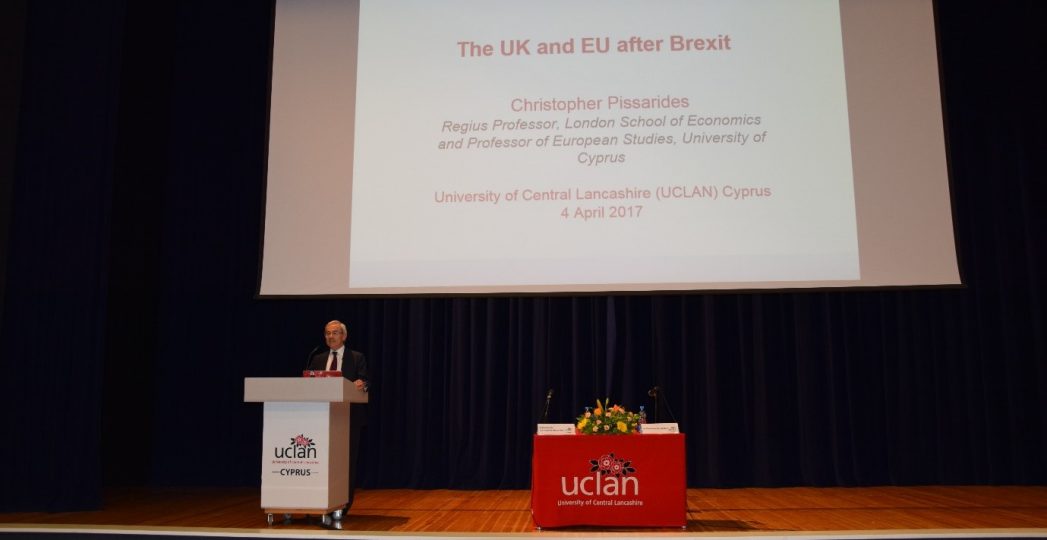 On the evening of Tuesday 4 April 2017, UCLan Cyprus was privileged and proud to host a public lecture by Professor Sir Christopher Pissarides, Regius Professor of Economics at the London School of Economics and a co-winner of the Nobel Prize in Economics.  The event was organised by the School of Law at UCLan Cyprus. In his lecture, Professor Pissarides adopted a refreshing cross-disciplinary approach. He began by tracing the historical origins of the United Kingdom’s troubled relationship with the European Union.  In this context, he tried to make sense of the emergence of the British Euro-sceptic movement.  Professor Pissarides then attempted to account for the extraordinary outcome of the national referendum held on 23 June 2016 when 51.9 per cent of those who voted opted in favour of the United Kingdom’s proposed exit from the European Union.  However, in the main body of his lecture, Professor Pissarides considered the anticipated economic and trade-related implications of Brexit, which is due to take place in 2019.  Not surprisingly, he envisaged a bumpy ride ahead for all of the parties embarking upon the difficult journey towards Brexit.

At the close of his lecture, Professor Pissarides kindly fielded a series of questions from academics, students and members of the public.

By the close of the evening, the audience was in a much better position to understand how history shapes economics, how economics interact with law and how law affects us all.

UCLan Cyprus expresses its gratitude to Professor Pissarides and to all those who attended his public lecture.

The lecture was livestreamed and a recording may be viewed, via Youtube, at the following hyperlink: https://wwwoutube.com/watch?v=zMZ39LQ-oM4

Additional details are available at http://www.uclancyprus.ac.cy/en/news/latest-news/uk-and-eu-after-brexit-public-lecture-professor-sir-christopher-pissarides