Book Now
Home / Discover / Happenings / Latest News, Law Academy / Transparency and Accountability in the Executive Branch of Government: The Past, the Present and the Future
Go back to Homepage 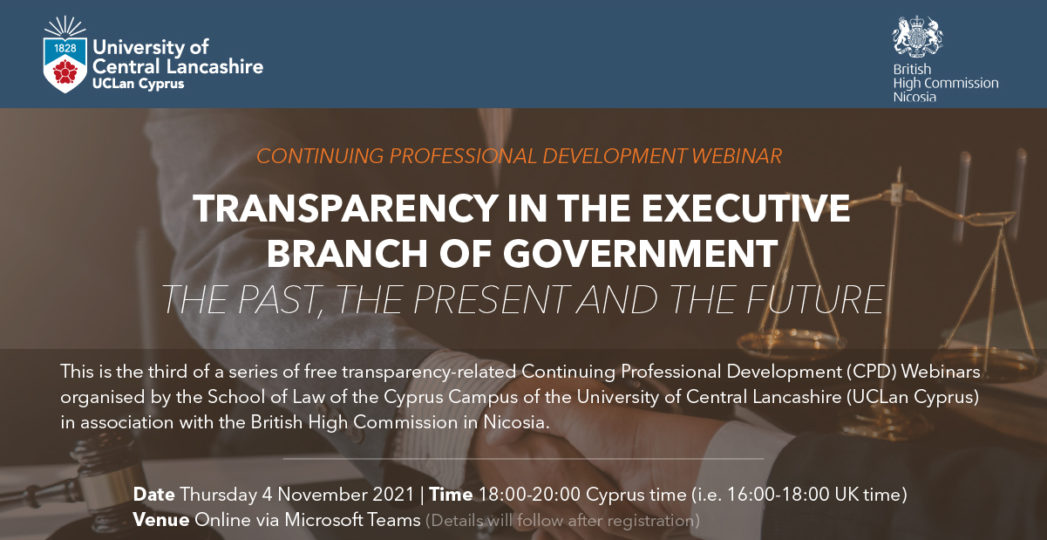 Transparency and Accountability in the Executive Branch of Government: The Past, the Present and the Future

On 4 November 2021, the School of Law of the Cyprus Campus of the University of Central Lancashire (UCLan Cyprus) was honoured to host a Continuing Professional Development (CPD) Webinar entitled ‘Transparency and Accountability in the Executive Branch of Government: The Past, the Present and the Future’.

This was the third of a series of free transparency-related Webinars organised by the School of Law of UCLan Cyprus, in association with the British High Commission in Nicosia.  The series was organised in the light of the coming into force, on 22 December 2020, of landmark new legislation in the Republic of Cyprus – the Law on the Right of Access to Public Sector Information 2017 (Ο περί του Δικαιώματος Πρόσβασης σε Πληροφορίες του Δημοσίου Τομέα Νόμος του 2017) which is available in Greek on the Cylaw website of the Cyprus Bar Association at www.cylaw.org/nomoi/indexes/2017_1_184.html

With the new legislation in mind, the general aim of the series was to promote greater public awareness of what is meant by transparency, open justice, access to public sector information and related principles. A related aim was to reflect upon the British experience of applying these principles in practice.

The first Webinar in the series, which was held on 31 March 2021, was entitled ‘Open Justice, Transparency and the Judiciary’.  On that occasion, the keynote speaker was Sir Robin Knowles, a Judge of the High Court of Justice of England and Wales.

The second Webinar, which was held on 25 May 2021, was entitled ‘Parliamentary Transparency and Accountability’.  The keynote speaker was Saira Salimi, Speaker’s Counsel in the House of Commons of the Parliament of the United Kingdom.

To view a full video of the second Webinar, please visit the Youtube channel of UCLan Cyprus at www.youtube.com/watch?v=rlpshafmCow

The third Webinar of the series began with an Introduction by Dr Nasia Hadjigeorgiou, Deputy Head and Assistant Professor in Transitional Justice & Human Rights in the School of Law of UCLan Cyprus.  She echoed the two premises upon which the Webinar rested, as set out in the flyer relating to it.  The first premise is that ‘transparency is an essential element of good governance as well as effectiveness and efficiency in the executive branch of government and in the wider public sector of every state.’ The second premise is that ‘in common with other states, the Republic of Cyprus requires a profound change in culture so that much greater emphasis is placed on both the stamping out of corruption and the promotion of transparency (as well as accountability).’

The Introduction of the Deputy Head of School was followed by some Opening Remarks by Stephen Lillie CMG, British High Commissioner to Cyprus.  After thanking all those involved in organising the Webinar, High Commissioner Lillie said how pleased he was to collaborate yet again with UCLan Cyprus which he described as ‘a pioneer of British university education in Cyprus’ and as ‘a long-established friend and partner of the British High Commission’.  He was particularly pleased that, on this occasion, the aim of the collaboration was to ‘promote greater awareness of what is meant by transparency and its importance in making states more open and accountable.’

High Commissioner Lillie highlighted the UK’s strong commitment to open government and open societies. He noted that this is an important feature of the UK’s Global Britain Strategy and its mission to be a force for good in the world. The High Commissioner also referred to the  Integrated Review of Security, Defence, Development and Foreign Policy which was published by the United Kingdom Government in March 2021.  With that official publication in mind, High Commissioner Lillie emphasised that the Integrated Review not only commits the United Kingdom ‘to work with partners and with civil society to promote effective and transparent governance’ but ‘to support strong, transparent and accountable political processes and institutions internationally.’

The next person to address the audience was the Keynote Speaker – Andreas Pavlou, Senior Research Officer (Europe) at the Open Government Partnership in Washington DC (www.opengovpartnership.org/people/andreas-pavlou/).

Mr Pavlou delivered a presentation bearing the title of the Webinar.  He started by drawing attention to the work of the Open Government Partnership and his own role within its independent reporting mechanism.  Mr Pavlou went on to discuss the principle of transparency and the new right of access to information in the public sector of the Republic of Cyprus.  He focused on the origins, provisions and implications of the new Law on the Right of Access to Public Sector Information 2017.

Mr Pavlou proceeded to summarise the results of some research which he carried out in the Republic of Cyprus during 2021.  These results indicated that the new Law is not operating as effectively as it ought to be across the Government.  In the light of these results, Mr Pavlou made a number of recommendations.  These included calls for much greater training to be provided across the public sector of the Republic of Cyprus, for the new office of the Information Commissioner to be more proactive and for each government ministry to publish a Publication Plan.  Mr Pavlou also urged citizens (including lawyers and journalists) to make use of the new Law and to challenge any poor procedures or excessive use of exemptions so as to ensure that the new Law works in practice.

The Keynote Speech was followed by a supporting presentation by the Discussant, Dr Klearchos A. Kyriakides, Senior Visiting Fellow in the School of Law of UCLan Cyprus.  His presentation was entitled ‘Transparency in the Executive Branch of Government: Some Lessons from the United Kingdom’.  Dr Kyriakides began by explaining what is meant by ‘transparency’ and other related terms such as ‘openness’ and ‘accountability’.  He then advanced four propositions:

‘1. Transparency goes hand in hand with accountability and other fundamental principles associated with a modern democratic society under the rule of law such as open justice, open government, freedom of information and public consultation.

‘2. Freedom of information is bound up with freedom of speech, freedom of expression, freedom of the press and other manifestations of freedom under the law.

‘3. Freedom of information laws are key enablers of transparency and accountability.  However, such laws alone are not enough.  They must be supplemented by other enablers such as a democratic anti-corruption culture which is steeped in ethics and embedded with facilitators of transparency and accountability [such as those identified in the presentation of Dr Kyriakides].

Against this background, Dr Kyriakides discussed a number of issues arising from the constitutional and legal history of the United Kingdom; these included the statutory as well as non-statutory facilitators of transparency and accountability which apply to the executive branch of government in the United Kingdom and to Ministers of the Crown who simultaneously serve in the legislative branch of government in either the House of Commons or the House of Lords.  Dr Kyriakides then pointed to a number of pertinent court cases before turning to the philosophy behind the Freedom of Information Act 2000.  That Act of the United Kingdom Parliament serves as a key statutory facilitator of transparency and accountability applicable to the United Kingdom Government together with the wider public sector.

Dr Kyriakides ended his contribution to the Webinar with the following thought which encapsulated the arguments advanced by the two speakers:

‘The new Freedom of Information Law [of the Republic of Cyprus] is an exceptionally helpful new tool in the toolbox of both the lawyer and the ordinary citizen.  That new tool must be used; it must not be abused.  … That tool, on its own, is not enough.  We need, on the one hand, a change of culture.  We need, on the other hand, all of the other tools in the toolbox of democracy to be used by the citizen and by the lawyer of the citizen.  If all of us, individually and collectively, can conduct ourselves accordingly we can hopefully build a more democratic and modern Republic of Cyprus – for the benefit of everybody and for the benefit of the rule of law.’

The flyer relating to the third Webinar in the series is available here: www.uclancyprus.ac.cy/wp-content/uploads/2021/10/Transp_Flyer_F3.pdf

A full video recording of the third Webinar is available at https://www.youtube.com/watch?v=aN4ptcc1PvA&t=382s

UCLan Cyprus expresses its profound gratitude to Andreas Pavlou, to High Commissioner Lillie and to all those involved in supporting the third Webinar as well as the Series of which it formed part.  UCLan Cyprus also thanks all of the speakers, members of the legal profession, law students and other people who attended one or more of the CPD Webinars in the series, including the third one held on 4 November 2021.

In common with the materials relating to the previous two Webinars in the series (available at the hyperlinks specified above), this press release will enable the educational impact of the CPD Webinar held on 4 November 2021 to be long-lasting and not geographically confined to the Republic of Cyprus.  After all, transparency and accountability are fundamental principles that must be understood as well as respected by all persons who hold public office in the judicial, legislative or the executive branch of government.  These principles must likewise be understood as well as respected by lawyers, law students and members of the general public, including those parts of the Commonwealth and the wider world that share the common law tradition or the Westminster model of parliamentary democracy.