Friday 12th February 2016 marked a crucial day for the Jean Monnet Module running at the School of Law of UCLan Cyprus in the field of the Law of EU Economic and Financial Governance (FECoGov), as it held its largest event since its inception in 2014. Dr. Stéphanie Laulhé Shaelou, Associate Professor at the School of Law of UCLan Cyprus and Jean Monnet Module Leader and Academic Coordinator welcomed the Honourable Judge Constantinos Lycourgos to deliver the fourth Jean Monnet Guest Lecture, his first public lecture in Cyprus since his appointment as a judge to the Court of Justice of the European Union in October 2014. The Guest Lecture was entitled ‘Measures taken in order to tackle the Euro Crisis and the case law of the EU Courts’.

During the one hour that the Guest Lecture lasted, Judge Lycourgos presented inter alia the various measures adopted by the euro area member states in order to deal with the sovereign debt and banking crisis. He reviewed the relationship which such measures entertain with EU law as these are partly within and partly outside the framework of the EU, while, even if within the EU legal framework, they largely rely on inter-governmental cooperation rather than on the Community method. Judge Lycourgos also reviewed the creation of new agencies in this context as well as the increased role of certain EU institutions. He then proceeded with analysing specific legal issues deriving from the above framework, namely the respective scope of application of economic and monetary policy in the EU as well as the enhanced role of the European Central Bank, through a consideration of applicable instruments and case law of the EU and national courts. His analysis continued with the finding that the overall architecture has been criticised as resulting in a democratic deficit and in a lack of effective judicial protection. The last part of the Guest Lecture was therefore devoted to a review in a comparative perspective of a number of cases relating to the handling of the Euro crisis, mainly those which have been referred to the Court of Justice of the EU by national courts or have been the subject of direct actions before the General Court of the EU (and still pending for some of them). Through his thorough review of the case law, the judge examined issues of constitutional importance for the Union and its member states as they have been clarified by the EU Courts, ultimately attempting to shed light on the question of the achievement of effective judicial protection at the EU but also national level.

The 100 guests of the Guest Lecture then proceeded to a cocktail reception offered by the Jean Monnet Module, at which they had the opportunity to exchange views and ideas with Judge Lycourgos. 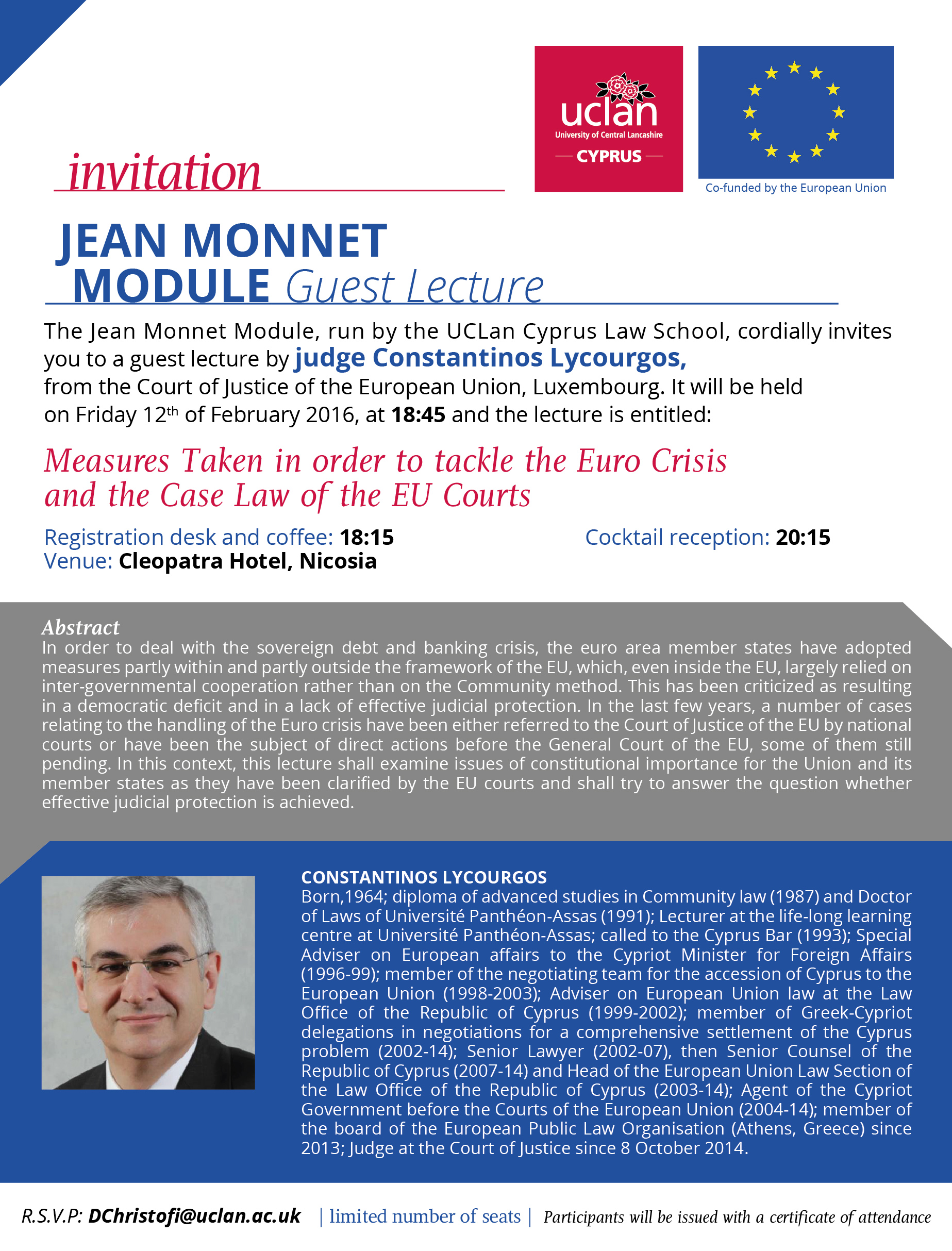